Bigodi swamp is a wetland sanctuary which is located in the Magombe swamp in Kibale National Park close to Fort Portal western Uganda in Kabarole District. The swamp is recognized as one of Uganda’s vast biodiversities. The swamp protects a number of primate species including baboons, white and black colobus monkeys, blue monkeys, grey-cheeked, Mangabey vervet monkey, L’Hoest monkeys, Chimpanzees, Mongoose, bushbucks, otters and many more to spot.  Kibale National park where this swamp is located is well known for chimpanzee trekking and also chimpanzee habituation.

Bigodi Swamp is a community natural resource and it’s a good economic benefit for different local communities who live around the Bigodi swamp. The Swamp is recorded as a bird watchers paradise whereby a birder can spot over 200 species of birds in the wetland including Blue Turaco.

Bigodi Wetland Sanctuary is registered under the Kibale Association for Rural and Environment Development (KAFRED), there a number of primates such as the chimpanzees which are the main habitats, with a diversity of wild animals with in Bigodi. 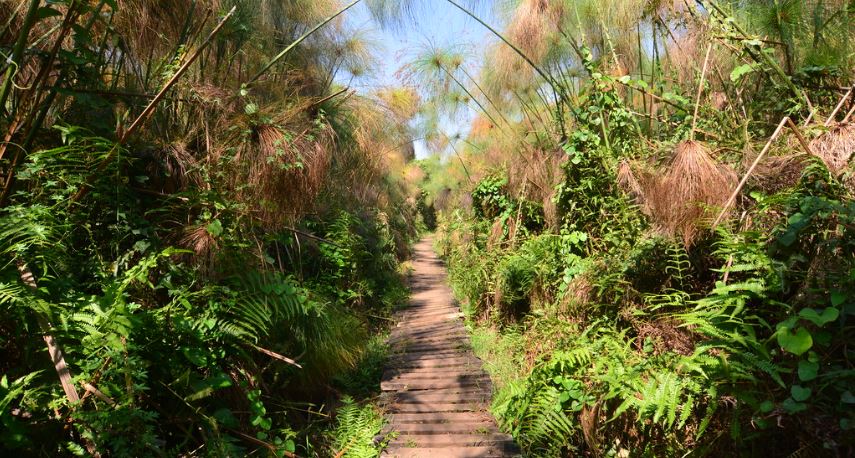 The word Bigodi is derived from a local word of Rutooro which means Kugodya, in English it means to walk tirelessly. Visitors were always very tired whenever they reached the swamp on foot.

The swamp has also contributed to the building of a secondary school in Bigodi and a nursery school, more bridges have been constructed within the village areas and many developments.

Bigodi swamp covers over 600 sq km, near the Kibale National Park which has a dense verdant forest in the north area, semi-deciduos forest, evergreen, medium altitude damp which covers 77% of the total land. The area has over 23% consists of plantations with grasslands as well as swamps.

The swamp provides a diversity of fauna and flora in a flourishing tropical rain forest. Bigodi Swamp has a number of bird species that are inhabited within the park ranges of the rain forest.

The park inhabits over 90 species of Guinea Congo forest and 40 species of the Afro-tropical highland biome with other species of the highland. Bigodi swamp is a habitat to over 200 bird species which can be spotted in different walking trails. The swamp has over 40 members of Bigodi women group, who engage in making beads, weaving baskets and also other crafts making activities.

Bigodi swamp has a number of trails where experienced guides can lead you to see various species. You’re encouraged to put on long sleeved clothes, in order to prevent bites from termites such as red aunts, thorns and many more.

On the Bigodi Swamp Community Walk, you will enjoy walking in communities to see the locals who live in the wetlands sanctuary. The community has over 40 members who make bags, baskets, mats most of these are exported to Europe. Bigodi swamp, gives one a thrilling moment in the rain forest, full of sounds of the Jungle.